an incredibly profitable opportunity, Denham transports Kong to New York City, with the intent of putting him on display for paying crowds as "King Kong: The Eighth Wonder of the World". Unfortunately on opening night, Kong escapes and goes on a rampage through downtown Manhattan, once again capturing Ann. In the film's finale, King Kong carries Ann to the very top of the Empire State Building, where he is engaged by a squadron of military fighter planes. Kong is finally killed, falling to the streets below and Ann is reunited with Jack Driscoll. In this original version, the filmmakers included a brief near-nude scene in which Kong removes Fay Wray's outer clothing and tickles her almost completely bare legs; this scene was famously censored and went unrestored, along with many other censorship cuts, until the film's theatrical re-release in the early 1970s.

Ann Darrow is played by Naomi Watts in the 2005 film and has more detail. She was an actress, but lost that job when her studio went bankrupt in the Great Depression. Ann was apparently destitute, as she was shoplifting fruit and caught, but bailed out by Denham, who came to her rescue by paying for the fruit and telling her of his grand plans in film. She also declined Denham's invitation at first, but she then accepted the offer when she was told that Jack Driscoll was going along too. Jack also develops a crush on Ann and even kiss each other before arriving at Skull Island. Ann originally thought that the sound editor of Carl's film crew, Mike, was Jack. After seeing Mike die in front of her, Ann screams with horror that echoes through the Island and then Kong's roar answers back. She was able to escape at first from the hostile natives at Skull Island, but was kidnapped from the boat and dragged to a sacrificial chamber in her bare feet and a negligee, where she is offered as a sacrifice to Kong by the natives. Kong takes her as Ann screams at the top of her lungs. She faints as Kong vanishes into the jungle. Kong roars as Ann moans as she freaks out. Kong almost drops her as Ann shrieks and yells. She stabs Kong with her skull necklace as she falls onto the pile of skulls. She attempts to escape but Kong grabs her, causing her to shriek. Jack and Carl try to find her along with many other crew members. Ann is heard screaming. She woke up the next day, she saw Kong distracted by eating Bamboo sticks. she tried to escape but Kong stopped her. she was then treated like a Rag Doll because King Kong at first was either angry or curious about Ann, enjoyed her dancing and acting, and kept pushing her, making him happy and hooting. When Ann shown anger at him, he also got angry and Kong left her. At the time she escaped, she was unfortunate again because Vastatosaurus Rexes wanted to eat her, and Kong saved her life.

That night Jack comes to Kong's lair, and disturbs him from his slumber, then a swarm of flying Terapus mordax attacks them. Kong ends up battling the giant bats, the attack resulted in Ann losing her dressing gown for unknown reasons (but it most likely her shirt was torn off by one of the Terapus mordax, this forced Ann to continue the journey wearing her pink slip dress only), Kong puts Ann in safety while he battles the giant bats, As Kong fights the swarm of Terapus mordax, Ann and Jack escape by grabbing the wing of one of the bats and then jumping into a river. They arrive at the village wall, with the angry Kong following them.

When Carl and the other crew men were done with their own problems in the island with most of them dead, they captured and kidnapped King Kong. Captain Englehorn was about to kill King Kong with a sharp harpoon but she begged and cried out to let Kong live. but they succesfully captured Kong, Ann simply stared at Kong before she broke down in tears due to have been unable to help Kong from getting captured, Carl takes Kong to New York, and he escapes in an angry mood destroying the ampitheater he was taken to. Ann Darrow realized she was the only person who can stop King Kong from trying to destroy Manhattan. Kong was already looking for Ann because he kept picking up women who resembled Ann. Ann and Kong finally are happy together but their happiness and joy vanishes when the military uses giant bullets to kill King Kong. King Kong, like in the 1933 film, ran away to highest building in the city, the Empire State Building.

When the two are trapped atop the skyscraper at the climax, she tries desperately to prevent Kong from being killed, much like Dwan in the 1976 version, but to no avail. After Kong's death, she embraces Jack Driscoll, who was trying to get to her the entire time.

In the Australian musical production, she is portrayed by Esther Hannaford. Ann's backstory is explored briefly. It is revealed she came to New York from the country to start a new life. After she is robbed and loses nearly all her belongings, Carl saves her from being arrested when she tries to steal an apple. Apart from that, her character is the same as in the 2005 film. At first she is afraid of Kong but she stands up to him and they later form a close bond after he saves her life.

In the original film, Ann is portrayed as a beautiful young woman, who, despite being told she doesn't belong on board a ship with several men, keeps an optomistic point of view. She is also quite charming, as Jack Driscoll, the tough first mate, even falls in love with her. However, because she is portrayed as a woman in the 30's, she is shown to be typical damsel in distress at times, and is helpless against Kong. Though Kong does fall in love with her, she is terrified of him and only screams when he is near.

In the 2005 remake, her character is given more detail: She is a struggling vaudeville performer who agrees to become Carl Denham's new lead actress when she hears that her favorite playwright, Jack Driscoll is with them. While on the voyage, she falls in love with Jack, and bonds with Kong after being captured on Skull Island. While at first, she is frightened by him, she realizes that he won't hurt her, and is even able to entertain him with her performance training, such as comic acting and displays of juggling skills. In addition, she eventually comes to sympathize with Kong, gaining the great ape's trust and understanding. This being said, he falls in love with her not only because of her beauty, but because of her courage and compassion. In this portrayal, she is described as having a bit more edge, as she works for her survival, takes more chances, and even forms a special relationship with Kong. Although after forming this releationship she also appears not to show much care or aknowledgement for the many men that lost their lives in absolutely horriffic and disgusting ways (Squashed beneath gigantic feet, being eaten, kicked off cliffs, squashed by giant legs and many other ways) in the effort to save her life (Admited she didn't know about most of the men's deaths as their bodies were spread out, left behind and forgotten on the island when they set sail for home. Their ultimate sacrifice never mentioned to her) But even after watching Kong kill many innocent sailors who unwillingly gave their lives trying to save her, Most notably Venture Crewman 16 who Kong forced into his mouth, bit and casually threw away right in full view of Ann she still focuses fully on her love for Kong.

In the musical, her character is pretty much the same as in the film although she also has some traits of the 1933 version, such as when Jack makes a comment that upsets her she stands up for herself. She also stands up to Kong when he tries to rip of a portion of her dress and later forms a bond with him after he saves her from a giant serpent.

Despite the differences, all three versions on Ann are beautiful women who are desperate for work, and thus accept the part in Carl's film. They both have charming personalities, are Kong's love, and are both described in each film by Carl Denham as being "The bravest girl [he's] ever known/met."

In both films, the character falls in love with Jack Driscoll, with the two even preparing to marry in the 1933 version.

In the 1933 film, she is wearing a long white dress. She has blonde hair, and screams a lot. Later in the film, the top side bit of her dress is ripped off, revealing a silver bra. Some critics thought this was too much nudity.

While being offered to for the ritual Dwan wore native garbs that consists a two-tiered beige and brown sleeveless, pleated gauze dress with natural braided rope ties, sandals and a woven wide grass belt

Ann here wore a grey coat which got very dirty after being harassed by dinosaurs and picked up by Kong, she loses her coat when Kong is attacked by giant bats revealing her pink sleeveless shirt underneath, later at the end of the movie, she wears a white dress. She has curly, blonde hair that stops at her shoulders, bright blue eyes, fair skin, a slender figure and a bright smile.

Ann reunited with the Venture crew

Ann and Jack escaping from Kong

Ann and Jack fall into the water

Ann getting her dress torn

Ann being taken away by Kong

Ann on the verge of tears

Ann and Jack running away from Kong 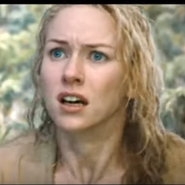 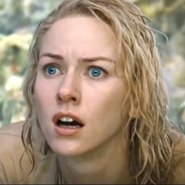 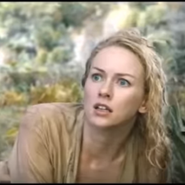 On Set/Behind The Scenes Pictures[]

Ann appears in the game as a partner in some chapters and, like in the film, she is taken by Kong. Like Jimmy, she only uses spears. However, she's able to heal A.I partners, quickly bringing them back to action.