Choy is an Asian sailor who worked as a cage/item storer on the SS Venture.

He is best friends with the cook Lumpy, and seems to accompany him everywhere. He also shows Jack Driscoll to his accommodation in the storage area of the The Venture (where Captain Englehorn normally keeps captured animals). He brags to Jack that Englehorn can make a lot of money from capturing exotic creatures such as the "white rhino" and so on, before being halted by the appearance of Englehorn himself, who puts a temporary halt to Choy's seemingly talkative nature.

He seems to look up to Lumpy for guidance, and as an authority figure. This is shown by the fact that Englehorn criticizes him for not putting away the chloroform properly, and he justifies it with "Lumpy said-" before having to be reminded that Lumpy isn't in charge of the ship, thus showing that he values Lumpy's word and instructions over what Englehorn (the legitimate figure of authority) says.

His dependency on Lumpy is reinforced by the extended edition of the swamp scene. A huge fish emerges, capsizing the raft that Choy and his fellow sailors are on. Choy resurfaces, looking panicked, and Lumpy automatically shouts to him; "Choy! Swim you filthy bugger!" He fails to do so, and Lumpy is forced to jump into the water and rescue him, showing their close bond.

He eventually dies in the Log scene. Kong kills Hayes, and Jack gives the order to shoot and kill Kong. All the sailors open fire, but Kong is merely irritated by their bullets, as he grabs the log they are standing on and shakes it, causing the crew to fall into the deep cavern below. Choy loses his footing and calls to Lumpy for help, clinging to the side of the log. Lumpy tries to save him, but Choy falls to his death in the chasm below.

Later, Lumpy can be seen sadly lying next to his friend's body. He still clearly feels a deep sense of loyalty to Choy and is saddened by his death, to the extent that when the Carnictis' attack and attempt to eat Choy's body, he becomes enraged. He begins punching and kicking them with his bare hands to keep them off, before attacking them with a machete and killing several. He could have retreated closer to the others for protection, but did not do so, instead choosing to defend Choy's body until he was eventually overwhelmed and killed by the vile beasts as a result. He had sacrificed himself to save his friends. Choy’s corpse, along with another unknown sailor were both probably devoured by the Carnictis by the time the remaining survivors get swarmed by the Arachno-Claw and Deplectors. 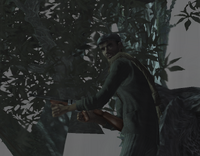 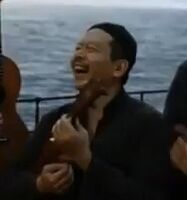 Choy singing Mhairi's Wedding in the dance (which was deleted from the movie).

Choy with the rest of the sailors. 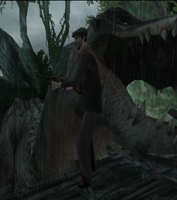