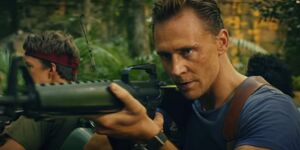 Capt. James Conrad is a decommissioned British soldier, who served the Special Air Service. He is seen in the film Kong: Skull Island, portrayed by Tom Hiddleston.

Not too much is known about his early life, however what is known is that his father served the Royal Air Force in Europe against the Nazis and died in a plane crash during WW2 in Europe, Conrad would honor his father by becoming a soldier. He served with the British S.A.S during the Vietnam War and at some point, decommissioned after the war.

Following the end of the war, Conrad was hired by Bill Randa, a senior official of Monarch. He would take on the responsibilities of a hunter and tracker, in return for a hefty sum of money, plus a bonus should they get back in one piece. He was first seen playing pool in a bar, he won the game and was about to take the money, but some thugs stop him, claiming he cheated. One of them was about to strike him with a knife from behind, Conrad then engaged them with a pool stick, one of them started throwing pool balls at him, Conrad dodged the first one, then hit the second back which knock the guy out. When he met Randa and Brooks and learned they were going to an uncharted island, he list the sort of things they were gone to die: Rain, heat, mud, disease carrying insects, mosquitoes, bacteria, and "the things that want to eat you alive."