King Homer is a Simpsons King Kong parody and the second scary story from The Simpsons Treehouse of Horror III.

In a black and white segment which is a parody of King Kong, Marge joins Mr. Burns and Smithers on an expedition to "Ape Island" to find the legendary "King Homer". Mr. Burns captures the giant ape and displays him to the press on Broadway. The photographers' flashes enrage King Homer, who breaks free from his restraints. He abducts Marge and wreaks havoc, eating many people in the process. He attempts to climb a tall building, but is unable to get even one story above the ground. King Homer collapses in exhaustion, and Marge helpfully suggests that he eat more vegetables and less people. In the end, King Homer and Marge marry on the same day Dick Cavett is born (November 19, 1936). The story ends with the wedding, and King Homer eating Marge's father Clancy Bouvier, although Marge is brave and not upset. 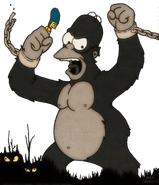 King Homer breaking through a wall.

King Homer and Marge getting married.
Community content is available under CC-BY-SA unless otherwise noted.
Advertisement