King Kong (キングコング Kingu Kongu) is a giant ape kaiju who appeared in the 1962 Toho Godzilla film King Kong vs. Godzilla. He is the first incarnation of Kong to appear in a film produced by Toho, followed by the Kong from King Kong Escapes.

A colossal ape worshiped as a giant demon god by natives of Faro Island in the Solomon Islands, Kong was encountered by members of an expedition to Faro financed by the Japanese company Pacific Pharmaceuticals. While the expedition members were quick to dismiss Kong as the natives' interpretation of thunder and lightning, they discovered that the creature was very real when he broke through a wall separating the native village from the jungle in order to fend off the attacking Giant Octopus. Kong proceeded to drink from huge jars of Farolacton juice manufactured by the islanders, which accompanied by their rhythmic prayer caused him to fall asleep. Pacific Pharmaceuticals attempted to transport Kong to Japan as a publicity to stunt to overshadow the recent return of Godzilla.

While still incredibly destructive and aggressive, Kong is portrayed as being somewhat more sympathetic than Godzilla. Kong seems to be mostly content living on Faro Island, staying behind the huge wall constructed by the islanders in exchange for the Farolacton juice and worship they provide him. Kong acts as an unintentional defender of the native populace as well, fending off the Giant Octopus when it comes ashore in the village. Kong takes an interest in the human woman Fumiko Sakurai, abducting her from a train while wandering through Tokyo and climbing with her to the top of the National Diet Building. Kong seems to be less aggressive than Godzilla, retreating promptly from their first battle and hiding from Godzilla for a large portion of their second battle.

In 1962, RKO licensed the character of King Kong to Toho Company Ltd., who produced a crossover film featuring King Kong and Godzilla. Toho considered producing another King Kong film in 1966, Operation Robinson Crusoe: King Kong vs. Ebirah, but replaced Kong with Godzilla and produced Ebirah, Horror of the Deep.

In King Kong vs. Godzilla, Kong instead comes from an island called Farou Island, where he is worshiped by the local natives as their mighty god. In King Kong Escapes, Kong is a legendary giant ape that resides on Mondo Island.

In 1962 King Kong was discovered by an expedition to Farou Island, which was sent there by Mr. Tako, marketing executive for Pacific Pharmaceuticals, in order to find a legendary monster worshiped by the natives. The expedition only heard Kong's roar from the mountains, but saw the beast himself when he battled a Giant Octopus that attacked a village on the island. After chasing the octopus off, Kong began to drink jugs of the Soma berry juice that the natives had prepared, and fell asleep. The expedition members had Kong tied to a raft and taken back to Japan to be used as publicity for the company, but their boat was stopped by the Japanese Coast Guard, who informed Tako that he would be liable for any damage caused by King Kong in Japan. Suddenly, Kong began to stir and try to break free of the raft. The crew members opened fire on the dynamite attached to the raft, causing it to explode. Kong emerged from the water unharmed, and swam to the Japanese mainland. Kong rampaged along the coastline until he encountered Godzilla in the wilderness. Kong tossed a boulder at Godzilla, who responded with a blast of his thermonuclear breath, which singed Kong's fur and set much of the forest ablaze. Kong scratched his head and walked away in defeat. 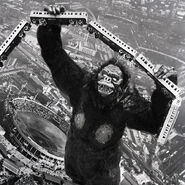 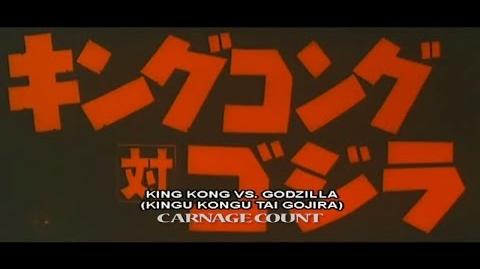 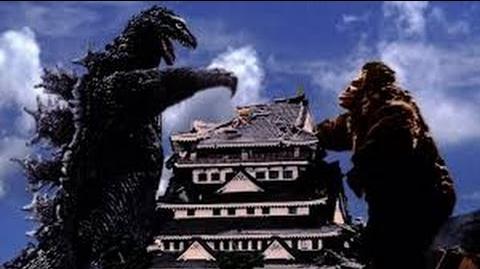 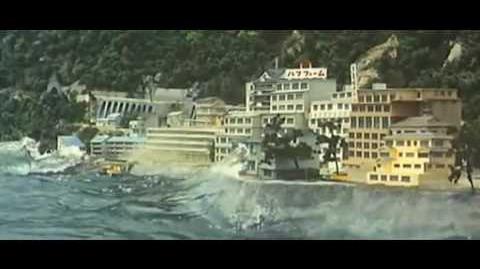 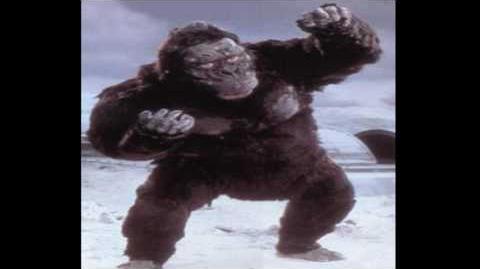 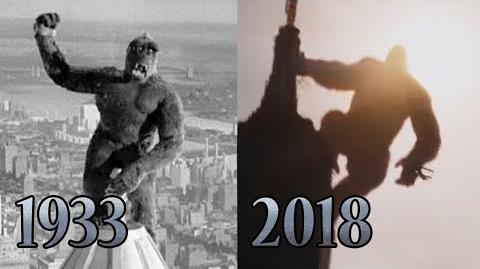 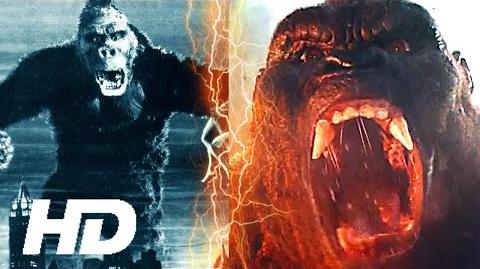 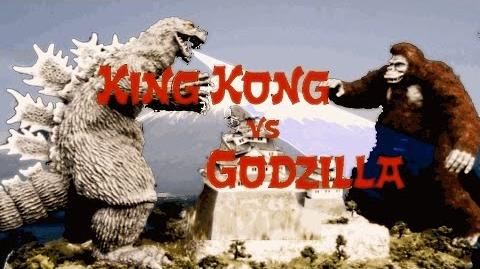