King Kong Wiki
Register
Don't have an account?
Sign In
Advertisement
in: King Kong in Comics, animation & other media 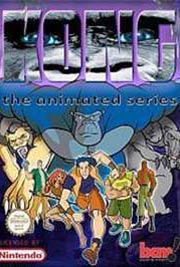 Kong: The Animated Series is an animated series that continues what happened after events of the movie King Kong (1933). Kong had aired on BKN in 2000, and was created to compete with Godzilla: The Series. In May 2001, Fox Kids began airing reruns of the first 13 episodes. Then, Jetix began airing reruns on September 9, 2005 as a prelude to the release of Peter Jackson's remake of King Kong. Also in 2005 a direct to DVD movie called Kong: King of Atlantis was released based on the series, followed by "Kong: Return to the Jungle" two years later. In King of Atlantis, Kong battles to save the mythical isle from a serpent queen. In Return to The Jungle, poachers attack Kong Island and capture its inhabitants to put on display in a zoo.

Kong: TAS is set decades after the movie's continuity, where the original Kong fell to his death from a Empire State Building, at the time of the series opening, which appears to be set well within reach of recent times (there is proof of computers and technology more advanced than the original King Kong movie’s setting).

In the opening two-part episodes "The Return", a brilliant female scientist named Dr. Lorna Jenkins took DNA samples from Kong’s body and created a clone of him. Dr. Jenkins was able to do this, through researching genetic manipulation, with the implied aid of a collection of ancient, powerful artifacts called the Primal Stones (which are part of the same island home the original Kong came from).

While still small in his infancy, this new Kong was befriended by Dr. Jenkin’s young grandson, Jason, who visited both of them early on in his childhood years.

However, Dr. Jenkins’ research fell under the attention of an ambitious man named Ramon De la Porta; an archeologist who was driven by greed and lack of morals, as well as the need to make himself a success in the scientific world. De La Porta and his men (disguised in a stealth costume) tried to get Dr. Jenkins to share her discoveries with him, but when she refused he later tried to sneak into her lab and steal them. However, he was discovered by Dr. Jenkins and they had a scuffle.

During the struggle, De la Porta had his hand splashed with a chemical that dissolved his right hand. He fled Dr. Jenkins’ lab, but a fire had started, and it burned to the ground.

Dr. Jenkins and Kong both escaped the blaze, but in order to keep Kong safe, she spirited the young ape back to his former home on "Kong Island", where she sequestered herself for nearly 20 years while she continued to raise and protect Kong, while she continued her research on the Primal Stones. She did keep in touch with her grandson Jason, who she swore to secrecy about her location.

20 years later, Jason Jenkins is attending a seminar at college with his school mate and best friend, Eric "Tann" Tanenbaum, which is being taught by a Professor (who is actually De la Porta) who has befriended Jason to some degree. He convinces Jason to take him to see his grandmother, who along with Tann (who provides the aircraft transport) travels with Jason to Kong Island.

Upon arrival on Kong Island, Jason, Tann and De la Porta are confronted by a native girl named Lua, who is the local Shaman and protector of the island. She takes the others and De La Porta to a hidden cavern, where Dr. Jenkins has been continuing her research.

It is there that De La Porta is 'outed' by Dr. Jenkins, but not before De la Porta manages to get control of the quartett, after revealing that his right hand is a cybernetic replacement for his original that was dissolved.

He takes one of Dr. Jenkins' newest inventions called a Cyberlink; a headset that allows for access to the internet, two-way communiaction and an additional effect of being able to merge the wearer with another creature on a genetic level; resulting in the formation of a massive, hybrid creature. When Jason uses the cyberlink to merge with Kong, it is revealed that when Kong gets angrier he grows in both size and power, becoming "Mega-Kong", although the more obvious benefit of the merge is that Kong acquires Jason's knowledge of hand-to-hand combat for use against his adversaries. It also works in reverse, allowing Jason to merge Kong into himself to transport the massive ape more easily.

De La Porta tries to make Dr. Jenkins reveal the location of the Primal Stones, but Kong—now grown to a massive size—intervenes and sends De la Porta scrambling for his life. Jason is forced to use the Cyberlink to stop De La Porta, but the evil scientist escapes, with the promise to return one day to take his revenge and capture the Primal Stones for himself.

The series follows the further adventures of Jason and Kong, who are aided by Tann, Dr. Jenkins and Lua in their battles against De la Porta and his henchmen Omar, Frazetti, Giggles, and Tiger Lucy. As well, Jason learns that the Primal Stones that De la Porta stole are part of a mystical seal that holds an ancient evil being named Chiros "The Destroyer", who is trapped underneath a temple near a massive volcano on Kong Island. The original Kong was tasked with keeping the balance of the Primal Stones, so the Chiros would never rise to threaten the world. Chiros has an ally in the sub-human creature named Harpy, who strives against Kong to upset the balance and free Chiros. He also has a powerful demon named Ominous as one of his minions who battles Kong.

All the while, Jason, Kong and his friends deal with other larger-than-life threats to the world, and travel the globe to save humanity; a feat made easy, thanks to the Cyberlink’s ability to reverse-merge Kong into Jason's body, allowing him to carry Kong anywhere they may need him and keep him contained until he is required, although the process can be uncomfortable due to the strong wills of both parties resulting in the occasional conflict for control.

Besides the threat of De la Porta, Jason, Kong, Tann, and Lua had some run-ins with a firearms dealer named Andre. On other occasions, movie director Howling Jack Crocket tries to prove to the world that Kong still exists.

The relationships between Jason, Tann, Kong and Lua are the foundation for their success against their foes. Jason treats Kong as a larger brother, signified by him calling Kong "bro", and he and Tann have been best friends for years. Lua, as the island Shaman has befriended Kong as part of her training, and duty to keep the island safe. Both Jason and Lua have some vested feelings for each other—hinting at a possible romance—ever since they first met (even though her and Tann did kiss once, while under the influence of two ancient rulers of a pre-Atlantian society which caused Jason to be jealous), seen where every time Lua hears of a girl Jason knows she becomes defensive and obviously jealous. As well as any new girl showing interest in him.

In what is chronologically the final episode (but isn't shown or listed as the final, as the last few episodes are mixed up), Kong, merged with Jason, throws Ominous into quicksand. De La Porta and Harpy use the Primal Stones to free Chiros, but De La Porta's life force is sucked out of him as part of the ritual. Harpy is defeated by Tann and killed when Lua uses the Primal Stones to strike her with lightning. Lua opens up a portal, and Kong defeats Chiros and throws him into the portal, sealing him back inside the rock. Kong destroys the rock, and De La Porta's life force returns to him, though it has been broken by the ritual, leaving him permanently incapacitated.

There are 13 Primal Stones, yet only 13 had their names revealed. These were the mystic stones that kept the demon Chiros locked in his imprisonment. The Primal Stones that are mentioned and/or used are: