King Kong, or also known as Kong, is a giant prehistoric gorilla created by Universal Pictures that first appeared in 2005 film, King Kong.

Kong is the ruler of Skull Island and the last of his species Megaprimatus Kong. He is 25 feet tall up to the shoulder and was the most powerful creature on Skull Island up until his death in 1933 New Year City. Unlike most adaptations this version was much more animalistic and more gorilla like. This version of Kong was also one of if not the most sympathetic adaption of the character.

Much of Kong's early life before the arrival of the S.S. VENTURE and Ann Darrow are unknown however it's assumed that he came from a family group of Megaprimatus Kong and learned to survive on the harsh environment that is Skull Island. At some point in time Kong became the last of his kind and was worshipped as a god by the Skull Island natives who presented human sacrifices to him.

Arrival of The S.S. VENTURE[]

When Carl Denham's cast and film crew arrived on the Island, Denham unintentionally provoked the Skull Islanders which caused Mike (the sound disigner) to be killed causing Ann to scream in terror. Ann's scream caused Kong to roar back in response encouraging the shaman to use Ann as a sacrifice. Later that night the Skull Islanders abducted Ann and offered her as a sacrifice for Kong. Kong answered to the tribal music and inspected Ann. Soon afterwards Kong took the terrified Ann and headed deeper in to the interior of Skull Island, Ann using her ceremonial necklace stabed Kong's hand causing him to drop her but only for a second.

Kong placed an unconscious Ann to the ground and later when she awoke Kong was eating giant bamboo and took the opportunity to escape but Kong wouldn't allow her too. In an attempt to distracted him Ann used her training as a dancer and a comedian which worked as Kong hooted in response. However Kong became more amused at Ann falling and tripping and after picking her up and pushing her a few times Ann had enough and stood her ground Kong roared in anger and through a tantrum in response until calming down realizing the shifted in dominance. Hearing the explorers Kong left Ann to investigate which she finally used to escape. Going to a cavern Kong spotted Hayes who in response to Kong's appearance began shooting at him which provoked Kong to attack and grab him. After inspecting Hayes for a few seconds Kong through Hayes across the cavern killing him just seconds before Hayes can shoot him. In response to Hayes' death Jack Driscoll and the rest of the search party began to open fire on Kong angering him while Denham filmed as Kong shaked and push the giant log they were on loose causing everyone on it to fall down deeper to the deepest part of the caverns.

Meanwhile Ann would get lost in the jungles of the Island and come across Foetodons, Megapedes and finally Vastatosaurus Rexes, Ann's screams attracted Kong and saved her from the three vicious theropods climacting in Kong ripping the bull V. Rexes' jaws and shattering it's skull in that moment Ann realized that Kong won't hurt her as Kong took Ann and brought her to his lair at the top of Skull Island. Moving past the skeletons of deceased Megaprimatus Kong, Kong and Ann began to bond while watching the sunset as Ann fell asleep Kong gently stroked her.

The Chase and Captured[]

At night when both Kong and Ann fell asleep Jack Driscoll had arrived to save her just as the two began to grab each others hands Kong suddenly awoke and attack Jack with the commotion attracting Terapusmordax which in turn began to attack Kong, Jack would use the distraction to save Ann. As the two swept downriver Kong bellowed in anger and dispair and followed them to the wall. As Jack and Ann made it through Kong broke through the wall and was greeted by Denham, Captain Englehorn as well as his men attempting to capture him much to Ann's horror. Although it seemed that the trap was working Kong got a second wind when he saw Ann being taken away. Determined not to lose her Kong fought through the traps and killing Englehorn's men. Kong would be weakened by the gunshots and Englehorn's harpoon gun until Carl Denham through chloroform directly at Kong's face severely weakening him. Before drifting to unconsciousness Kong held out his arm in a last attempt to retrieve Ann who could only watch in sorrow.

Kong would be taken to New York City on December and put on display as Carl Denham's Eight Wonder of the World. On display Kong was notably depressed and without Ann he made no effort to escape from his confinement. During the reenactment of Ann's sacrifice Kong's eyes were filled with hope as it seemed that he was reunited with Ann until seeing her face. Realizing it's not Ann, Kong roared with disgust and anguish when photographers began shooting pictures it was the last straw as the flashing lights irritated Kong and using his strength to break from his chains and go on a rampage. Kong was bewildered and confused by his new surroundings and caused havoc on Times Square destroying vehicles, killing a few Ann Darrow look a likes and attacking a trolley that bumped into him. Kong only ceased attacking when Jack Driscoll in a taxi got Kong's attention who remembered him as the person who took Ann and begin to chase after him across Manhattan until finally catching him. Before he could kill Jack, Kong saw Ann walking towards him (knowing only she can cease his rampage) gently picking up Ann the two had a tender moment and Kong wondered through the city with Ann in toll made his way to a frozen lake in Central Park and began to play with Ann laughing and having fun.

Unfortunately Kong's happiness would be short as the United States Military began to fire at him. Kong frantically took Ann and began to run to safety. Climbing to the Empire State Building Kong and Ann briefly had a another moment of peace and watch the sun rise. The blissfulness was short lived as biplanes began to circle the Empire State Building Kong put Ann safely as the planes began shooting at Kong, Ann determined to try and save Kong climb up to try and help, but stray gunfire damaged the latter and Ann almost fell until Kong caught her. Putting her inside the comb of the building Kong protected her from stray gunfire. Kong brought three of the six planes down but his wounds were starting to get to him, Ann frantically began to signal the planes to stop shooting which appear to have worked until a single plan fired behind Kong when Ann was no longer in the line of sight. Succumbing to his wounds Kong and Ann had a brief and sad moment as Ann watched the life drain from Kong's eyes and Kong's lifeless body falls down in the streets of New York. A reporter assuming the airplanes killed Kong, Carl Denham appears and says his iconic line " It wasn't the airplanes. It was beauty that killed the beast" with that Kong was now dead bringing the extinction of Megaprimatus Kong. 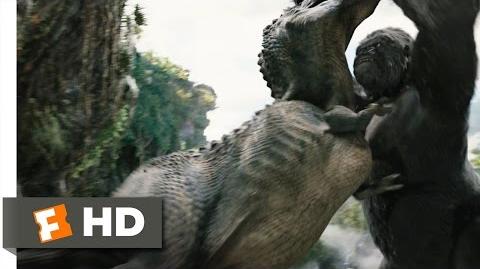 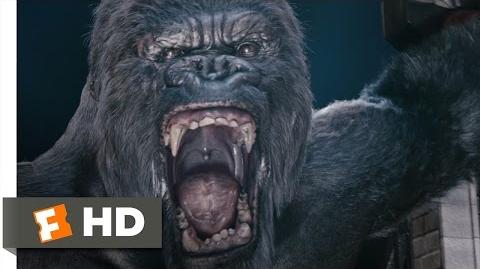 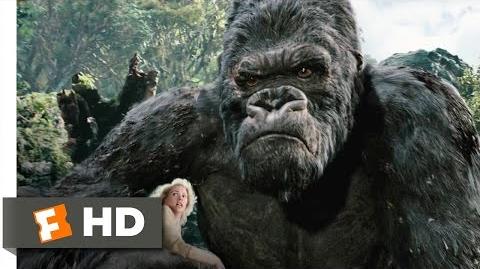