King Kong Wiki
Register
Don't have an account?
Sign In
Advertisement
in: Creatures Of Skull Island, Dinosaurs, Theropoda,
and 12 more

The V. Rex, Vastatosaurus rex, is a large, unique tyrannosaurine tyrannosaurid from Skull Island, descended from Tyrannosaurus. It measures 40-50 feet long. The animal is described in the book "The World of Kong: A Natural History of Skull Island" (2005).

The biggest terrestrial predator on Skull Island is the V. rex. Like their prehistoric fellow tyrannosaurs, Skull Island V. rexes have little competition for their spot as top predators. In spite of their size, they can turn on a surprising burst of speed for short periods, clocking up to 25 mph for limited stretches in pursuit of prey.

V. rexes have developed many unique features over the 66 million years since the Mesozoic Era, but they still bare several recognizable similarities to their Cretaceous ancestors. V. rexes have large heads, filled with long teeth that are constantly being regrown to replace those lost in conflict. Their heads are intensely reinforced with heavy bone. As the primary weapon of the tyrannosaurine, an individual V. rex’s head is often distinctive, being covered in scars and calluses. Abnormal bone growths form from old battles with prey, other predators, rivals, or even mates. Narrow, short ribcages and a large gap between the ribs and hips allow V. rexes surprising flexibility for animals of their size, a necessary adaptation to the broken terrain of Skull Island.

Their forelimbs are small in comparison with the rest of their bodies, not growing as fast as the rest of the animal so that by adulthood this disparity in spite of their size is strikingly evident. Early tyrannosaurids had only two fingers on their forelimbs but Skull Island V. rexes have three. When dragging carcasses, the tiny arms help pin the meat against the body and prevent it swinging around.

While juvenile V. rexes tend to cluster in the thick jungle interior, the large adults hunt mostly in the open areas of the lowlands where they can move freely. Large males seek the most open territories while mature females usually stake claim to areas on the fringes of the thicker forests where they can find hidden nesting sites.

Fiercely territorial, adult V. rexes suffer no rival encroachments on their hunting grounds. Territorial boundaries are regularly marked with feces, and dawn roaring will reinforce claims to land. Neighbors can tell much about the

physical condition of the owner of a territory from the smell of its feces and the sound of a roar. Displays and scenting minimize potentially dangerous confrontations between individuals of different sizes. Occasionally disputes between evenly matched V. rexes can erupt. With the threat of serious injury, these confrontations are usually resolved with intense roaring matches in which each individual attempts to intimidate the other into giving way. However, when this fails, violence ensues. Older V. rexes bare the crisscrossing scars of many such fights.

Exceptions to their solitary existence are made in the breeding season. Males will leave their hunting grounds to seek out females in season. If the female is receptive, she will accept the male, and the couple might stay together, hunting in her territory for several days before she tires of him and sends him on his way. Adolescent V. rexes (seeking to hone their hunting skills) will sometimes follow adults at a safe distance during the mating season, watching and occasionally stealing meals from unguarded kills. Taking advantage of the season of nomadic adult males, bold adolescents might move in to claim currently undefended territory as their own.

V. rexes are capable of tackling very large prey species, but their massive size is often employed to intimidate smaller carnivores like Lycaesaurus and Venatosaurus into giving up their kills - they even sometimes eat these smaller predators as well. While effective hunters, a meal is safer to obtain by simply appropriating someone else’s carcass, bullying smaller scavengers like carrion parrots, carrion storks, Foeducrista and giant gray agama. V. rexes have intensely acidic stomachs, capable of processing even the most rancid rotting meat, a feature that serves the species well as heavyweight scavengers. Their massive jaws can exert astounding pressure, shattering bones to expose the rich marrow less robust predators are unable to reach.

As hunters, V. rexes tend to employ ambush tactics, using cover in and around waterholes or forested areas to surprise prey, like Malamagnus and even Foetodon. Ligocristus are the primary prey of adult V. rexes, being the most abundant. Ferrucutus, Pinnatono, and Brontosaurus are more dangerous prospects; however, if a young or sick individual can be separated from the protection of the herd it can be an easy kill. Any smaller species are likely game, though most are too small to provide more than a snack. The greatest challenger for the hunters lies in not being spotted by prey. Adult V. rexes are dark in coloring and, despite their size, can be surprisingly stealthy, using shadows near the fringes of scrub, rocky outcroppings, or ruins to hide their approach.

Their black scales also aid V. rexes in warming up quickly in the mornings, boosting their energy levels to gain an advantage over still sluggish herbivores (despite many being warm-blooded).

Their large size contributed to their paramount strength, enabling them to withstand and match King Kong's strength. Their stout build and frame had made them extremely durable, able to shake off King Kong's powerful punches several times as well as his grapples and throws. They were also capable of surviving falls from great heights and were quite capable in traversing vertical landscapes for such large animals. The most fearsome aspect of theirs however was their seemingly limitless stamina, able to achieve a burst of acceleration and maintain speed, covering distance tirelessly and lasting several minutes in a full fledged fight with an adult Megaprimatus kong. Quick on their feet, they were shown to at least be able to keep up with Kong. They also seem to be more than capable of keeping up with human beings who are in a reasonable state of fitness such as Ann Darrow and likely the natives on Skull Island had they ever ventured from the Wall. Most notable is that despite their massive bulk these animals were capable of leaping onto prey or foes as shown when a full grown female V. rex leapt onto Kong's back. They are virtually impervious to bullets from pistols, rifles, machine guns, and even shotguns (though these were from the 1930's). In fact, it seems like several rounds of fire only agitated the beasts with no signs of injury, pain, nor any sign of fatigue or withdrawal of its assault. Spears also cannot hurt them at all.

Their heads were very large in proportion to their overall body, with powerful jaws lined with brutish teeth ready to shred any and all that it targeted. Its head was also incredibly thick and capable of taking multiple blows from a full grown Megaprimatus kong and was probably also used as a ram against enemies. As with their Mesozoic ancestors Tyrannosaurus rex, V. rex's jaws were their main form of attack, capable of killing prey with ease. The jaws of the V. rex were shown to be even more robust in comparison to the Tyrannosaurus. They were known to have bone shattering bites just like their predecessor and the bite force of a V. rex could perhaps due to possible evolution advancenment exceed the Tyrant Lizard King's. The tail was also extremely durable, capable of whipping motion that could easily shatter bones or outright kill their target. It's hind legs were also very capable and sturdy, lined with rough but sharp claws. The feet also appeared capable of gripping objects similar to a raptorial bird, as shown when one leapt onto Kong.

The true extent of their sense is debatable at most as their behavior seems to change dramatically from searching their prey to pursuing them. Their sense of smell, while in a less aggressive state seemed to be limited to a certain extent, much akin to their vision as they were shown to have difficulty in locking onto minuscule preys on said instance. Nevertheless, once they have acquired their prey, they would pursue them endlessly with great precision to the tiniest of cracks.

Their intelligence seemed to be somewhat limited but not entirely primitive. They were shown to be quite capable of simple deduction via instinct as evident in how one V-Rex was able to understand its duel standpoint with King Kong and the ultimate price of winning that duel. Furthermore they were shown to be very cooperative with their own species under certain instances, capable of hunting together with great synergy. Ultimately however, they were driven by their insatiable hunger and predatory instinct and in normal circumstances this sort of behavior was not usually typical.

While Ann Darrow was being chased by a Foetodon, a juvenile Vastatosaurus rex appeared and killed the Foetodon by crushing it in its jaws. Upon seeing Ann, the V-Rex chased after her. Ann managed to hide on a fallen tree, but a second V-Rex, a matriarch, appeared and attacked her. Thankfully, Kong arrived and rescued Ann. The matriarch attacked Kong and was soon joined by the juvenile. Kong took on both V-Rexes, only to find himself attacked by a third one, a bull. Kong quickly killed the juvenile by smashing its head with a boulder. Kong then threw the V-rexes off a cliff, but the male grabbed Kong by the foot with his jaw, causing Kong to lose his grip and fall with Ann. Kong battled the V-Rexes through the mess of vines and tried to reach Ann. Eventually, Ann and the male fell, dropping to the ground below. Kong then kills the matriarch by bashing the female's head against a canyon wall which violently snaps her neck. The male cornered Ann and prepared to kill her, but Kong landed behind her. After a vicious struggle, Kong grabbed the V-Rex's jaws and pried them apart until they snapped, cracking the V-Rex's skull and immediately killing the mighty dinosaur. After Kong left Skull island the V-rexes become the new top predator on Skull island. (The male was last to die in a 1v1 with Kong). 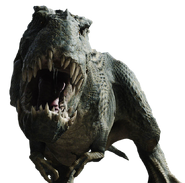 The adult Bull V.rex (the largest of the 3) prior to being killed by Kong

A Vastatosaurus rex takes a blow from a Megaprimatus kong

the immature V.rex known as "the Juvenile" w/ prey 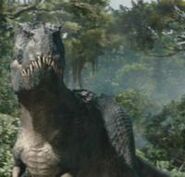 a V.rex meets its gruesome demise at the hands of Kong

V.rex with young sauropod (most likely a Brontosaurus)

the Matriarch and the Juvenile corner Kong w/ Ann

A male V.rex snaps at Ann while tangled in vines

a group of Juvenile V.rex come face to face with a deadly pack of Venatosaurus

A female V.rex about to ambush Ann Darrow (who was just chased by a smaller V.rex) 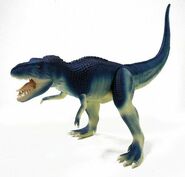