King Kong Wiki
Register
Don't have an account?
Sign In
Advertisement
in: Creatures Of Skull Island, Dinosaurs, Theropoda,
and 15 more

Venatosaurus ("hunter lizard") was a medium sized theropod dinosaur that lived on Skull Island, and were the descendants of a group of non-avian dinosaurs called dromaeosaurids. It was 16-24 feet long, but fairly lightweight for its size.

Living on Skull Island's highlands, these large, vicious creatures were superb predators that could prey on animals 10 times their own size. Descended from a dromaeosaurid ancestor, the Venatosaurus had evolved into a predator well-equipped for life on Skull Island. Their hips were more mobile than those of their ancestors, allowing for greater agility and flexibility, albeit while sacrificing running speed. Their hip joints also allowed them to crouch down to the ground, which gave them the ability to use even the slightest cover if needed. Venatosaurus' eyes were set high on their heads, allowing them to peer over cover while remaining hidden. Their eyes functioned much like a cat, allowing them to see in dim light. Their rib cages are shorter but deeper, giving them more flexibility at the waist and hips, without sacrificing lung capacity. Their deep ribs also allow for better muscle attachment, meaning their forearms were better able to hold onto prey.

Venatosaurus tended to ambush their prey, getting as close as possible before bursting out of cover and chasing down its prey. Venatosaurus were very efficient at using the island's terrain to their advantage, and would chase prey into canyons or over low cliffs. Venatosaurus were, with the exception of V. rexes, the most dangerous predators to be found on Skull Island. Pack-hunters, Venatosaurus were lean, mean, killing machines, top-tier predator, capable of tackling the largest prey items Skull Island had to offer.

Highly intelligent and social, Venatosaurus lived in packs of six to twelve or more full-grown adults and assorted young. They preferred jungles to the open grasslands, as the thick forests provide cover for them and nests for their young. Venatosaurus nests were dug out amid the roots of giant jungle trees. All chicks were the responsibility of the entire pack, who brought back food for the young. While out hunting, a single guard would remain behind, watching over the nest. Hunting territories were large, and well marked, with a mixture of tree scrapings, urine, feces, and the like. Other packs may have contested territory from time to time, with a lot of posturing, roaring, and noisy displays designed to resolve the dispute before violence broke out. They sometimes will conceal themselves for ambush by burying themselves in rubble in the area.

Another species of Venatosaurus lived primarily in valleys and hunted in packs. They were much smaller than normal Venatosaurs.

Upon spying a herd of Brontosaurus in a valley, a pack of Venatosaurus went in for the attack. They chased them through the valley and across the side of a mountain, and caught the attention, and gunfire, of some humans that were among their prey.

model of Venatosaurus used in the video game

group of Venatosaurus in the video game

Deleted aftermath of the giant dinosaur foot stepping on the Venotosaurus 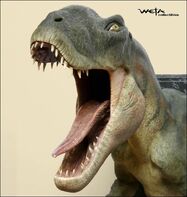 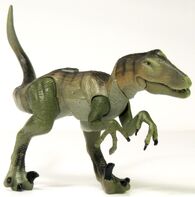