This individual was a sailor who worked on the SS Venture on an expedition to Skull Island.

He is equipped with a Thompson M1928.

This man was an old sailor on the SS Venture who was hired by Carl Denham as a depth measurer to sail to Singapore (not knowing that the ship was heading towards to Skull Island). He enjoyed watching Ann Darrow and Jimmy dancing during the ship's dance. During the arrival of Skull Island, the sailor measured the depths. When the ship hit the island's wall he helped Lumpy and the other crew remove stuff out of the ship in order to keep it from sinking. He joined the crew to search for Ann (who had been kidnapped) and survived most of the dangers until the Insect Pit. During the Ferrucutus Cerastes attack, he is seen firing his Thompson along with the others until Ben Hayes took them to stop. When the Ferrucutus attack, he was the first person to get hit by it. He survived most of the dangers, including the Brontosaurus stampede, and the Piranhadon attack. That is hen it came to the log, when Kong shook the log, and threw it into the abyss, along with Jack, Carl, Jimmy, Lumpy, and possibly Venture Crewman 3.

When the insects started to attack the crew, this sailor tried to climb up the cliff, but was unfortunately grabbed and eaten by a Deplector. 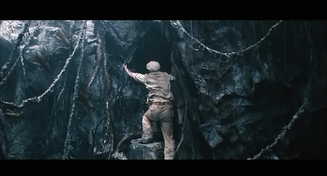