This individual was a sailor who worked on the SS Venture.

This individual was a sailor on the SS Venture who was hired by Carl Denham to an expedition to Singapore (not knowing that the ship was actually heading to Skull Island). During the dance he beat a drum while Choy sung Mhairi's Wedding and enjoyed watching Ann Darrow and Jimmy dance together.

He went with most of the crew to search for Ann after her kidnapping and survived through the many dangers of the island until the group crossed the swamp. The rafts were attacked by a Piranhadon, spilling them into the water and forcing them to swim to shore. The sailor was the last person to make it to the shore, but at the last second with safety in his grasp, the Piranhadon snatched him up, shaking him violently as he screamed in terror and dragging him under the water to devour him. Denham filmed his death, while checking to see if his camera was still working. He was the third and final crewman to be killed by the Piranhadon. 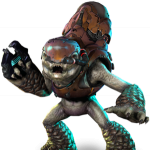 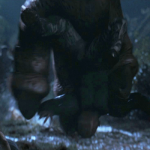