This Individual was part of the crew of the SS Venture on the expedition to Skull Island.

This man was a sailor who worked on the SS Venture. He was one of the men hired by Carl Denham to go on an expedition to Singapore(not knowing they were actually going to Skull Island). This crewman is sometimes seen on the ship, he is later seen along with the crew watching Ann Darrow and Jimmy dancing, which they enjoyed, he is seen by Venture Crewman 20. He then took part of the rescue party to go rescue Ann, he survived the encounter with the Ferrucutus Cerastes they encountered first. When they arrived in a canyon to take a break, they come upon a large footprint and heard rumbling, then began to ran as a herd of Brontosaurus and got caught in it and wasn't seen after this.

His death sequence was cut. In some Behind the Scenes material his deleted scene is named: A sailors bad luck. Peter Jackson tells us:

This was a fun little gag, that was going to be quite in the middle of the Bronto-stampede. We never got it completely finished though, because we felt that the stampede was a little to long. So unfortunately this piece was a bit that we ultimately ended up taking out.

So, in the extra deleted material, this man can be seen running up a little hill, located in the middle of the valley, while all the dinosaurs are continuing their stampede and running past him. Then suddenly, when he thought he was safe, a Venatosaurus jumps forth and snatches him. The man desperately pulls up his gun and fires at the Venatosaurus head. He then falls to the ground, just to be picked up and devoured by another Venatosaurus.

Although in the cinematic version of the film, the last death sequence in the dino-stampede may be him, rolling over and being crushed under the weight of a Brontosaurus. The similarity to Venture Crewman 3 can be easily mistaken in this sequence, but because of Venture Crewman 3 appearing later in the movie, we can exclude him.

In a later scene Lumpy said: "4 of us are dead", whether his death in this deleted scene is canon or not or Lumpy miscounted.

This sailor was portrayed by Roussel Dubois in Peter Jackson's 2005 version of King Kong.

The sailor clinging on to the rock in the middle of the valley.

Suddenly a Venatosaurus comes forth.

He tries to get his gun out but in time.

The poor sailor gets snatched.

Bruce Baxter looks behind his shoulder and witnessing the dramatic events.

The man fires at the dinosaur, ultimately falling to the ground, just to be picked up by another Venatosaurus. 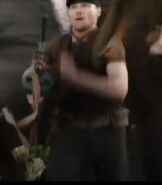 The sailor running in the stampede